After the End with Harry Manners

Posted by Sirens Call Publications on December 14, 2012 in Anthologies, Carnage: After the End

Every time that Sirens Call Publications releases an anthology, we ask each of the authors to provide us with a guest post; something that speaks to the inspiration for their story that you will read. With the release of Carnage: After the End – Volume 1 &Volume 2, our inspiration series may run a little longer than our other anthologies. But that’s okay, we love Post-Apocalyptic Horror and both volumes have a fantastic mix of tales. Continuing on with our inspiration series, today we feature Harry Manners, author of A Birthday to Remember in Carnage: After the End – Volume 2. 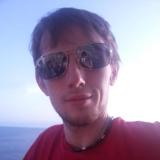 Harry Manners was raised in the quiet county of Bedfordshire, England. Currently taking a gap year from his studies to focus on writing, he spends his time working on his second novel and indulging in reams of short stories. Harry lives with his parents, two siblings and their Labrador pup Ludo. You can connect with Harry on Twitter, or on his blog.

Without further ado, I give you Harry…

The Unbroken Bridge and The Dream

A Birthday to Remember ended up as a short story, but it began life as a chapter of my post-apocalyptic fantasy novel, The Kin of Cain. While the novel’s path eventually moved away from the events that ‘Birthday’ depicts, I felt that it stood far too well on its own feet to warrant not rescuing it from Story Heaven – a place I tell myself is a beauteous garden paradise, and not amongst the dank detritus of my shredder’s collection basket.

To give a little perspective, I’ll talk about what originally inspired me to start writing the tale that eventually became Birthday, and its sibling novel.

I’ve had a fair few projects to work on since I started writing in any serious manner, and no shortage of ideas – perhaps even too many ideas. Before ‘Cain,’ they had all formed over many months, slowly brewing in the back of my mind until they occupied too much of my attention to be ignored any longer.

When The Kin of Cain came along, however, the entire thing — all eight hundred pages of it — hit me all at once. I even know the date, because I wrote it down: 24th of August 2009. I’d been sitting cooped in the backseat of my girlfriend’s ungenerously-sized car with two other adult-sized people for a good few hours. We were heading to the beach on a day far too hot for it to have been sensible to brave the hundred mile journey in a car no bigger than a matchbox, with an engine that might as well have been a furnace and a temperamental air conditioner that did little more than give us false hope. I’d been fighting a pretty serious bout of heat-induced nausea when we passed over the Queen Elizabeth II Bridge.

The bridge, for those of you on the other side of the Pond, is a whacking great stayed-cable thing, put up in 1991 to span the eastern side of the Thames. Running beneath it is an enormous industrial complex that covers at least a square mile or two; all warehouses, forklifts and endless swathes of concrete.

It was the sight of that complex alone that sparked everything. Whether by some magical combination of stimuli in just the right concentrations, or simply the stuttering death-throws of a brain rapidly taking on the characteristics of a fried egg, in that moment the entire story and all its minutiae were delivered right into my lap, as though fresh off the press. It felt like being sucker-punched between the eyes.

24th of August was a Sunday, and so pretty much every facet of business was running on skeleton crews. But as we passed overhead, I didn’t see a single person down there, not one; amidst the bustling metropolis of London lay this fenced off microcosm, utterly deserted. And not only was it empty, but it appeared that everybody had punched out on Friday afternoon without finishing up their last job of the day: doors were ajar; gates were propped open; warehouses lay open to the elements; and forklifts sat out in the open, en-route to dockland containers.

It looked almost as though everyone had, quite suddenly, vanished on the spot.

Of just what had been going on down there, I still have no idea. Maybe there was a chemical spill. Maybe lunch-breaks are get-up-and-go affairs in that yard. Or maybe I imagined the whole thing.

It doesn’t really matter; I got my epiphany nonetheless. I started scribbling right there and then, on the back of a receipt.

Thus the story was born: a tale detailing the struggles of a young man who awakens one morning to find that just such a vanishing has happened the world over, leaving him to face a harsh new reality.

After three years the novel was finally finished, and along the way had gone through a lot: one of which was fracturing into a trilogy, setting up a vast new mythology for future projects; another was giving rise to A Birthday to Remember, which will forever serve to keep the origins of the story alive in my memory. 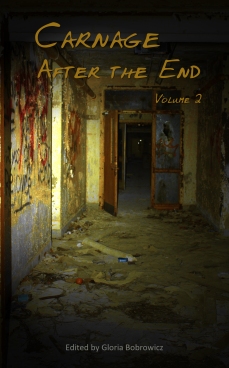 Hell has invaded Earth and happy endings are a thing long since forgotten.

The ten stories in Carnage: After the End – Volume 2 tell of the frighteningly horrific and cruel lives the survivors must face. Each one takes us to a place where humanity’s stragglers are forced to battle for their very existence against their own grim reality; creatures from different worlds or times, individuals or groups of miscreants who feed on the fear of the weak, and even the terrifying threat of unknown bacterial organisms. Their will to go on diminishing among the tatters of the civilization they once knew.

In a world where society has collapsed and terror lurks around every corner, no one can be trusted and nothing can be taken for granted.

The Apocalypse has come, leaving in its wake small pockets of survivors battling to stay alive; each carving out a new beginning for mankind…

Contributing Authors in Volume 1 include:

Contributing Authors in Volume 2 include

Interested in picking up a copy of both volumes?

Here’s an excerpt from A Birthday to Remember, Harry’s contribution to Carnage: After the End – Volume 2…

Alexander was staring at the ceiling. As the room materialised around him the cold arrived, raw and gnawing. His back arched as tendrils of ice bit at the base of his skull and his fingers curled of their own accord while the chill stole along his limbs. Air sailed from his mouth as a puff of vapour, twirling upwards.

He winced, drawing his legs upwards until he was curled into a ball and his teeth were bared. His forehead became coated in perspiration, whilst his head pulsed and something burned behind his forehead.

Beyond the cold, there was little else. Time crept along lethargically, without purpose, and all the while his fingers clutched at his palms, and a storm of light flashed before his eyes.

And then the pain was gone. Suddenly, immediately, it was absent. Alex blinked, the air shuddered from his mouth, and he looked around.

His bedroom lay around him, untouched. The unmade bed lay below him, torn into disarray. For a moment he lay still, afraid to move, lest the pain return, and then he turned his head and looked at the vast ocean of adolescent detritus.

He sat up and looked down at his body. Clad in untarnished nightwear, his skin bore no sign of the cold, nor sign of injury, but the flesh was taut and the hair along his limbs stood on end.

The air was still cold, but the chill was odd; lacking in true substance, instead little more than a feeble sensation attacking his face and hands.

Standing hesitantly, his breathing calmed and he ambled through the masses of discarded shirts, books and empty bottles until he reached the window and looked out onto the street.

The sun had risen and the birds were singing, but a heavy mist had descended, shielding the road and surrounding homes from view. The driveway below sat as it always had, but there was something else there now, something new.

A small red car, beaten and stunted, was parked haphazardly beside the hedge in a poor attempt to disguise it. He frowned at it as something akin to revelation stirred within his stomach and then he took a step back from the window, moving for the door.

It was his birthday…

And that concludes our inspiration series from most of the authors in Carnage: After the End – Volumes 1 & 2! Hope you enjoyed them! Look for the inspiration series behind Legends of Urban Horror: A Friend of a Friend Told Me coming soon!

One comment on “After the End with Harry Manners”