Reaping with Lori Michelle – You Should Have…

Posted by Sirens Call Publications on September 28, 2012 in Anthologies

Lori Michelle is the author of You Should Have in Sirens Call Publications newest anthology, Now I Lay Me Down To Reap. We wanted to know the inspiration behind it, so we asked Lori. This is what she shared with us…

“You Should Have” was written in a response to a joke that my friend and I had with one another.  He had the mock-up of my newest release, but was just holding on to it and not reading it.  He’s not much of a reader, so I knew for him to even pretend to read it meant something.

I kept telling him that he would like it if he would just read it.  His response to me was always, I have it and I will read it.  I even told him it was full of sex and he would enjoy that, but he never seemed to read past the first 20 pages.  So it gave me the idea, what if an author wanted more from her readers?  What if she wanted to get a true experience to write in her next novel?  How far would an author actually go to elicit a response and capture that essence?

When I saw that Sirens Call Publications had posted this anthology, it seemed to fit in perfect with the train of thought I was already having, and I knew that I had to write my “joke” story about an author that will go to any lengths to get what she wants.

In “You Should Have,” the author, Callie LaRue, is trying to send a message to her next character, and he doesn’t pick up on the full meaning until it is too late.  She will go through whatever it takes to make sure that her characters are as lifelike as possible.  And I am not going to tell you anymore, since I want you to read and enjoy the story.

We all have a secret wish and a secret desire to get someone to act the way we want them to.  Most of us just simply keep that internal and never follow through.  But once in a while, a monster gets let loose and goes after whatever it is they want and won’t accept any less.  It is only through writing, as an author, that our own secret monster gets unleashed on the world without too much bloodshed.

After all, our characters are made to do exactly what our hearts desire…

Interested in reading an excerpt from You Should Have by Lori? Keep reading:

Henry Jones liked order. His clothes had to hang in his closet a certain way. His coffee had to be made just right. Anything that disrupted his schedule was immediately loathed. This OCD-esque perfection drove everyone crazy and it wasn’t surprising that Henry lived alone. So when he found out that his secretary had to take leave for personal reasons, he wandered through the bank in a haze.

That’s when she walked into his life.

He saw her across the room and tried not to stare. She had an air about her that he hadn’t seen in a woman in a long time. She looked over at him and smiled; he was taken aback by how confident she was. He smiled back and walked over to her.

“Williams, Clarissa Williams. I am looking for Henry Jones, I have an appointment with him at 12:00.”

They shook hands; the sexuality exuding from her pores impressing him. It was as if she knew she was in complete control of the situation. “So nice to meet you, Mr. Jones.”

He led her into his office and sat her down in one of his chairs, never once letting go of her hand. He wasn’t sure where this act of chivalry came from since he had never done this for anyone else that walked through the doors. “So what can I do for you, Ms. Williams?”

She waved her hand dismissively. “Clarissa. And I understand that you are looking for a temporary replacement for your secretary.”

Henry was shocked. His secretary just told him yesterday that she needed to take a sudden leave of absence for a couple of months. “How did you know…?”

“That’s not important. I just know you need someone and I can use the temporary work.”

“Well,” Henry said, clearing his throat, “tell me a little about yourself, Ms…. Clarissa.”

“I am familiar with the inner workings of a bank office since I worked at Dunder-Holtzcraft as Mr. Dunder’s secretary for several years. I left the position just a few years back to pursue my writing career. But recently I found myself needing more public interaction and some ideas for my next book, so when I heard about this opportunity, I decided to call you up.”

She shifted in her chair to expose her cleavage and Henry tried not to stare. She was poised, confident, sensual, and he was instantly drawn to her. “You’re a writer, Ms. Williams?”

“Yes, I use a pseudonym: Callie LaRue. Perhaps you’ve heard of me?”

Henry swallowed; Callie LaRue was the most famous mystery writer of the last decade. He was ashamed to admit that he had never read anything by her; but here she was, sitting in front of him in all her glory. She slowly uncrossed and re-crossed her legs, reminding him of the slut in that movie, Basic Instinct. He felt himself go flush.

“Yes, Ms. LaRue, I have heard of you. Why would you be interested in a temp job at a small bank like ours?” 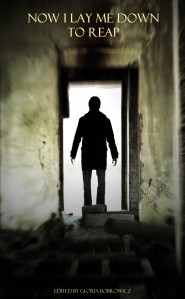 The eighth commandment; thou shalt not steal.
But everyone covets something that isn’t theirs…

Wander down the darker paths of the minds of twelve brilliantly talented authors as they conjure stories of retribution, deceit and betrayal.

Would you chance your family’s fate to the gods in return for a favor? Are the finer things in life worth having once you know the cost someone else had to pay for you to indulge in them? Would you give up your most addictive passion so that others might reap the benefits, regardless of the reward? Or perhaps, the chance at a fresh start and a new life appeals to you? Are you prepared to reap what you have sown?

Within this collection, you’ll find tales all too believable and beyond your oddest imaginings. But there is one thing you will not find… In this anthology, there are no happy endings.

Featuring the literary talents of:

← Reaping with Thomas James Brown – My Inspiration for Beasts of Burden
Reaping with John H. Dromey – Digging Up Ideas… →