Days with the Undead Blog Tour: Round Up #4

Posted by Sirens Call Publications on April 22, 2012 in Days with the Undead Release, News 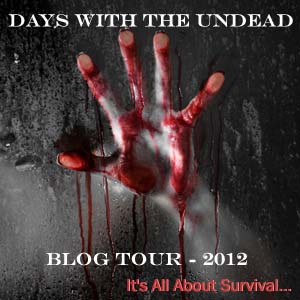 Have you been reading along with Julianne? Perhaps you’ve missed a stop on her fantastic Days with the Undead: Book One tour? No need to worry, we’ve done another round-up for you so that you can caught up and perhaps enter yourself in some giveaways to win a free copy of the book!

MuseInks welcomes Julianne Snow, zombie expert, whose new book Days With the Undead has recently been released by Sirens Call Publications. Julianne graciously answered my questions about her creative process, what she learned on the road to publication, and offers her top 5 tips for surviving a Zombie uprising…

Q: You wrote throughout Junior High and High School, but stopped writing for a long time after a teacher suggested you were better suited for other things. What happened to make you rediscover your love for writing?

A: I got sick and found that I could no longer escape into the worlds that others were creating for me. Losing that outlet and having to live in my own head for quite some time brought all of the worlds and stories that I had succeeded in suppressing bubbling back up to the surface.

If you would like to read more of Ami’s interview with Julianne, find it here.

Today I’m pleased to present an interview with a Canadian zombie writer, a none-too-subtle reference to Julianne Snow, which should come as no surprise to those of you who follow her (@CdnZmbiRytr) on Twitter.

Julianne is in the midst of a marathon blog tour for her new novel, Days With the Undead, which brings her to As you Were today.

Julianne was born in Toronto, Ont., where she still lives, and was the only girl in a family with four children.

She got her taste for horror early, watching Alien at age four with the rest of her family (her older siblings chickened out, but Julianne hung in till the end).

By age six, she was watching George A. Romero’s zombie classic Night of the Living Dead, so her chosen genre of writing should come as no surprise.

What to read the rest of David’s interview with Julianne, you can find it here.

How does my iPod know what song needs to follow the next when it’s on shuffle? I’ve always wondered that – mainly because as I’m writing, there is never a moment that I need to hit the skip button. Is my iPod magic? Probably, but that’s only from the sheer fact that I don’t readily understand how all of my music fits into such a little thing.

Since I knew that I was going to be guesting on David’s blog, I thought it was the perfect time to enlighten everyone as to what I like to listen to while I’m writing. Now I know that some people need the constancy of silence while in the zone – but not me. When I write sometimes I find myself needing something hard and heavy to help fuel the mood with which I want to write in. Other times, I’m looking for something smooth and melodious. It mainly depends on my mood and how much of a brain beating I need to take in order to expel the distractions around me and immerse myself in the world of my choosing. In the end, I’m sure that it only serves as background noise to my subconscious but if I don’t have music playing, it doesn’t feel right. Music and writing are forever connected for me.

An Interview and Zombies: Why I Dig the Undead (guest post) –

Many people don’t care for Zombies and I can understand that opinion in some cases. Many think that the genre has been overdone. The fact of the matter is there has been such an evolution in the genre as of late that there are some new and fresh perspectives that breathe new life into the Undead.

Let me go back to my first experience with the Undead. I was six years old and that takes us all the way back to 1984. I turned on our family television to find something to watch; it was one of those days that I was at home from school with a cold. I probably should have been in bed resting but sometimes vegging out in front of the television is highly warranted. What I found on the screen held my attention rapt for the entirety of it. Before my eyes was George A. Romero’s 1968 black and white Night of the Living Dead. It was my first introduction to the idea of the Zombie and it was amazing. There were scenes that scared me (the My Little Pony comforter from my bed acting as a shield for my eyes) but more often than not, I found myself getting engrossed in the story. Even at six, I was hooked.
If you want to read the rest of Zombies: Why I Dig the Undead, find it here.
***
Can you please give the readers a little bit of background information on your good self?

Hmmm… Well I am a 34 year old woman living in Canada. I have a full time job and I write in my spare time. Days with the Undead: Book One is my first full length novel but I have short stories in The Sirens Call Issue One, and Women of the Living Dead along with two due out in anthologies to be released in late spring.

I see that you are Canadian, is it true all Canadians are afraid of the dark?

Well if the answers from the last census can be trusted – yes!

If you’re interested in reading the rest of Jim’s interview with Julianne, read it here.

And now… it’s time to get undead with fellow zombie author, Julianne Snow. Are you ready to get your brains nommed?

JW: Let’s start with horror in general and drill our way down into the nomlicious brains of the undead. So your first horror movie was Alien. What a great film to have as your first – I believe mine was a Vincent Price film called The Abominable Dr. Phibes. I was so glad to have been born in the mid-sixties as horror was really just coming into its own. And it’s been a glorious and strange hayride since. And even though I can see horror in a downswing, I know it will come back. That down swing does affect us. We writers of the darkly fantastic willingly jump on a genre we know isn’t the massive seller that, say, Paranormal Romance is. But we go down that evil rabbit hole not only willingly, but with a passion many writers don’t know. That isn’t to say other writers aren’t passionate – they certainly are. But horror writers have another layer of passion that I associate with the likes of teachers. Teachers do what they do because they love it. Most horror writers I know do so because they can’t imagine writing anything else. Horror is in their blood and it consumes them.

But, on the upswing of that, horror fans are the most loyal fans out there. They love their frights and once they find a writer they like, they’ll stick with them through thick and thin. They know that coagulated, spilled blood is far thicker than water.

JS: I completely agree with you Jack. Horror writers are some of the most passionate out there. Writing good horror is hard. Really hard. Sure, you can gore things up and make a passage uncomfortable to read but can you really entice those reactions of actual fear out of a reader? Gore is uncomfortable but fear is primal. It’s not an easy feat to elicit fear mainly because not everyone reacts the same way to the same thing. I’m a firm believer that you have to immerse yourself in your work in order to get those reactions. As a horror writer, you owe it to your readers. Horror is defined in its plainest terms as an intense feeling of fear, shock or disgust. While I’m writing I like to build on those emotions, sometimes alone and sometimes in harmony. I find that the intense build to a singular moment can be a bigger pay off than injecting horrific moments just for horror’s sake. It’s that rollercoaster ride within the pages that sticks with you.

To read the rest of Jack’s discussion of most things horror with Julianne, you can find it here.

The Past, Present, and Future of My Writing (guest post) –

Wolf has asked me to write on a few specific things when we discussed the possibility of an appearance on his wonderful blog to support my new book Days with the Undead: Book One. At first, I didn’t know how I was going to answer the questions that he asked me because as simple and straightforward as they are, there is so much more to them. I have spent many days with his requests on my mind and now, I finally feel like I’m ready for the world to read my thoughts and my dreams and to get a deeper glimpse into the private oasis my mind is for me.

In the beginning, I wrote because it freed me. It freed my mind from all of the stories that clouded my imagination and made it impossible to concentrate on any other task. I grew up in a happy home but I was never truly content unless I was escaping into another world. I don’t even know why that is to be perfectly honest. I played the part of “happy child” but for the most part I wasn’t. I got teased a lot because my parents couldn’t afford all of the name brand clothes the other kids wore – it was hard but it made me strong. Writing was a release for me – was it all good, of course not. Heck, it could be crap now, but that wouldn’t make much of a difference to me because I write for myself.

To read the rest of The Past, Present and Future of My Writing, check it out here.

We’re all busy gearing up for Easter and that means coloring eggs, filling baskets and planning family dinners – there’s nothing better! It’s one of those times each year when we take a step back and give thanks for the blessings in our lives.

Today’s guest does that every day. After surviving an illness, Julianne Snow went on to write ‘Days with the Undead’, a 5-star read in either paperback or Kindle.

JS – In five years I see myself writing and publishing what I write. I do see myself having a respectable amount of success, which I define as people enjoying the books that I write. I’m hoping that success lets me stay at home and write full-time but we’ll see about that when five years rolls around. As for five years ago, I never thought I would be here. I thought that I would be married and living the life of a wife and mother with a full-time job in an office somewhere. There are a few things that prevented me from getting there but I don’t feel bad about them. It’s our life events that shape who we are. I conquered a life threatening illness and it showed me what it was that I wanted to do with my life.

If you’d like to read the rest of Kathy’s interview with Julianne, find it here.